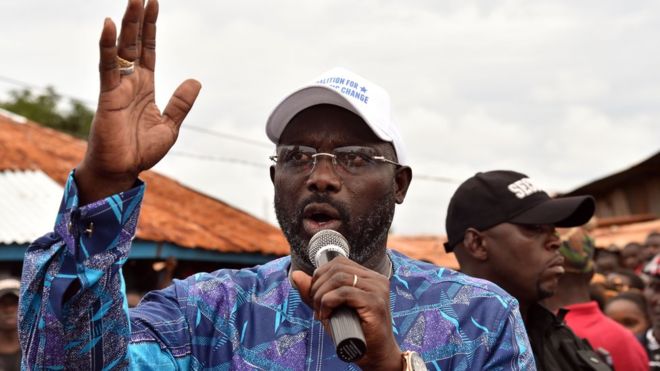 Liberia finally has a new president and to no one’s surprise it’s former soccer star George Weah, who was favored to win Liberia’s run-off election.

Weah, 51, won the polls with 61.5% of votes and will be sworn in on Jan. 16 2018 when president Ellen Johnson Sirleaf’s term expires. The event will be significant as it will be Liberia’s first democratic transfer of power since 1944.

Weah’s victory at the polls comes after his third attempt having first contested back in 2005 and again in 2011, as the vice-presidential candidate under Winston Tubman. Weah was up against Joseph Boakai, Liberia’s vice-president since 2006. Boakai had also served as Liberia’s minister of agriculture in the 1980s. Boakai, 73, campaigned on the back of the incumbent government’s achievements and his superior leadership. But it failed to resonate with most of the electorate however, with Weah winning in 14 of Liberia 15 counties. Weah’s positioning and rhetoric as an outsider up against the Liberian political establishment proved far more effective.

Both men first went up against each other on Oct. 10 but, as neither was unable to secure a 50% majority vote despite Weah’s early lead, a second round run-off was scheduled for Nov. 7. Following allegations of electoral fraud in the first round of voting, Liberia’s Supreme Court delayed the run-off to allow the country’s electoral commission investigate the claims. The run-off finally went ahead on Dec. 26. The postponement and rescheduling of the elections may have taken its toll though and resulted in low voter turnout. Only 1.1 million people voted in the run-off—900,000 less than the first round of voting.