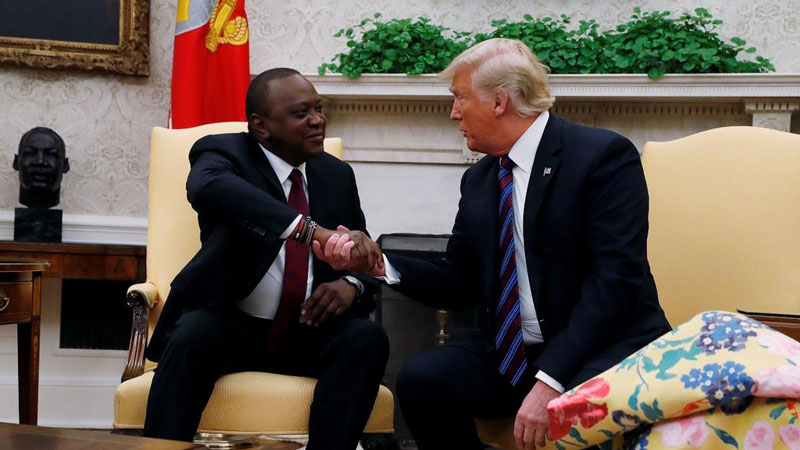 President Donald Trump’s proposed budget issued on Monday calls for deep cuts in aid to Kenya as part of an overall rollback in US funding for many Africa-focused programmes.

Support for development initiatives in Kenya will fall from the USD102 million provided in 2018 to USD43.5 million in accordance with Mr Trump’s spending plan for the 2020 US fiscal year that begins next October.

A similar reduction of more than 50 percent is sought in US economic and development assistance for sub-Saharan Africa as a whole. It will plummet from USD1.5 billion approved by Congress for 2018 to USD665 million in 2020.

In its State Department budget proposal, the White House justifies these cuts as ways of “reducing dependency on US assistance and increasing self-sufficiency” on the part of African nations.

Touting the “Prosper Africa” plan it outlined in December, the Trump administration says it wants to “fundamentally transform the nature of our bilateral relationship with these countries from an aid-based focus to true trade partnership.”

Health programmes in Kenya overseen by the US Agency for International Development (USAid) would be budgeted at USD54 million in the coming year, compared to USD82 million appropriated in 2018.

Even steeper reductions will be made in the HIV/Aids programme known as Pepfar that has saved hundreds of thousands of lives in Kenya.

Mr Trump wants to allocate USD276 million for this State Department-administered effort in Kenya, compared to USD441 million the US spent in 2018.

The envisioned downscaling of Pepfar in Kenya reflects the 22 percent cut that Mr Trump is proposing for the entire President’s Emergency Programme for Aids Relief, which was launched in 2003.

The White House also apparently wants to end US support for the African Development Bank and for the Young African Leaders Initiative that President Obama crafted as a way of wooing Africans who could become influential figures in the coming years.

While the new budget plan does signal the low priority the Trump team assigns to Africa, there is virtually no chance that it will actually be implemented. Assistance for Kenya, specifically, will likely be returned to previous levels once Congress approves its own US budget for 2020.

“For the third year in a row, the president’s foreign affairs budget request is dead on arrival on Capitol Hill,” said Congressman Eliot Engel, chairman of the House of Representatives Foreign Affairs Committee.

“I predict that once again the Trump administration’s attempt to hollow out our international affairs budget will meet bipartisan rejection in Congress.”

Mr Trump had asked Congress in each of the past two years to slash aid to Africa, but the House and Senate — which were then controlled by the president’s own Republican Party — largely ignored those proposals.

The outcome this year may prove even more unfavourable to the White House now that the Democratic Party is in charge of the House.

The president is seeking almost 19 times as much funding for military programmes — USD750 billion —than for diplomacy and foreign aid combined: USD40 billion.

But the White House is calling for a deep cut in US financing for peacekeeping operations in Somalia, which would drop from USD254 million in 2018 to USD90 million in 2020.

That proposal will probably have no bearing, however, on direct US military actions in Somalia, which have escalated considerably during the Trump presidency. Nor is it expected to lessen the degree of US support for the African Union’s efforts to contain al-Shabaab.

At a press briefing in Washington on Monday, a reporter asked why the State Department and USAid are slated for a 23 percent funding cut while the overall US budget would be reduced by five percent.

Doug Pitkin, a State Department budget and planning official, responded that Mr Trump’s proposal “does support diplomacy and development, just at a different set of priorities with lower spending on some programmes.”