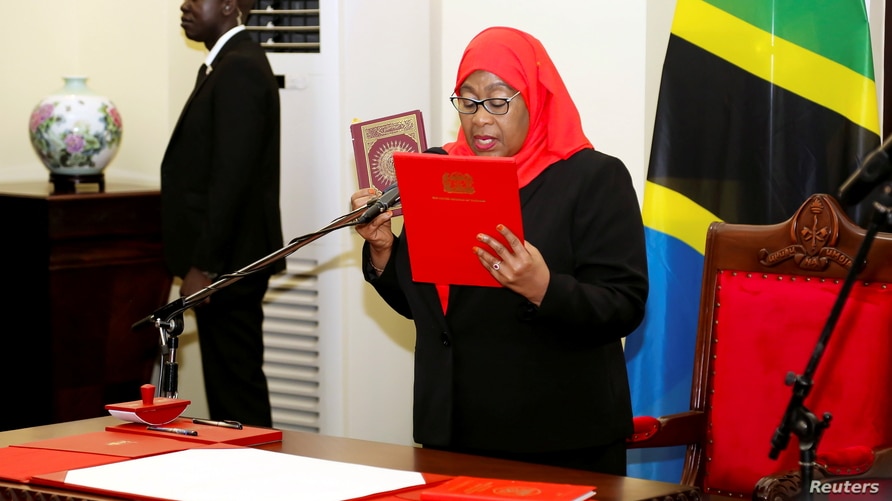 Samia Suluhu Hassan is now officially the president of Tanzania.

Suluhu, who was serving as the country’s vice-president before her swearing in on Friday, ascended to the top most seat following the death of her predecessor, John Pombe Magufuli.

Magufuli’s death was announced on Wednesday, with the government saying he died after losing the battle to heart failure.

Suluhu becomes the first female Head of State in the East Africa region.

She came into the political limelight in 2015, after she successfully ran for the presidency alongside the late Magufuli.

The two were elected into power again last year, following a controversial poll that led to the country’s opposition leader, Tundu Lissu, fleeing to Belgium again, after a fallout with the deceased.

Suluhu takes over at a time when Tanzania is headed to its economic peak on the background of Magufuliâ€™s financial and anti-corruption policies.

The world is also watching to see how she handles the coronavirus pandemic in the country.

One of her most praised attributes is her love for education and girl child empowerment.

This was demonstrated while she was serving as Minister of Labour, Gender Development and Children in Zanzibar, in 2005, when she lifted a ban that had been imposed on school girls returning to school after giving birth.

She also demonstrated her humanitarian nature in 2017, when she visited Lissu in Nairobi, after an assasination attempt.

She joins Sahle Work Zewde of Ethiopia in the list of current serving female African presidents.